“Bottled Water is bad.” That’s the message most environmentalists have been trying to spread for many years. Plastic packaging hurts the environment as well as the beverage itself. Most bottled water brands are no better for you than filtered tap water – in fact, some bottled water is nothing but tap water. Maybe you’ve heard this all before.

It seems that in the wake of environmentalist efforts, bottled water companies are desperate to save their brands, and out of that desperation comes advertisements that make this everyday commodity – you guessed it – sexy. Sexy celebrities could probably sell snow to an Eskimo. (If you’re lost, please, read on…)

Actress Jennifer Aniston was a long-time spokesperson for Glaceau’s Smart Water. In this ad, she bares her tight stomach but denies the press the rumors that she has been on a baby food diet. Smart Water, then, is the assumed culprit – giving the brand a sexy, healthy lifestyle image.

New England Patriots quarterback Tom Brady joined Aniston in the Smart Water campaign in the same year, adding his muscular build to the brand’s image. This was a Smart move (pun intended) on the part of Glaceau, as the electrolyte-enhanced water presumably eases muscle fatigue in athletes.


In 2004, Glaceau named a Vitamin Water Flavor – “Formula 50” – after the rapper, 50 Cent, who, in addition to being a shareholder, personally endorsed the brand. Later, when Coca-Cola bought the drink in 2007, 50 made over a million on the deal.

With Vitamin Water Focus, Kelly Clarkson soon joined 50 Cent as another artist to have a flavor created with her name on it, followed by Carrie Underwood with Vitamin Water Energy, she has since gone on to promote other drink brands. However, they didn’t stop at just two American Idols. Ellen DeGeneres’ endorsement of Vitamin Water Zero became apparent when she joined the American Idol judging panel in 2010, as the Glaceau brand replaced the judges’ famous, red, Coca-Cola cups during Hollywood week.

There was a rumor going around that Justin Bieber’s favorite bottled drink was Vitamin Water. There was even a Facebook page titled, “I Now Like Vitamin Water Because of Justin Bieber.” This goes to show how much celebrity endorsements influence consumer behavior.

Mark Wahlberg endorsed high-performance sports water in a commercial that features him in the middle of an intense workout. Wahlberg even teamed up with IZOD and AquaHydrate in a strategic marketing partnership to promote the brands through the IZOD IndyCar Series. 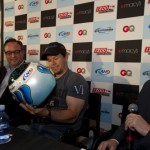 Twilight Actress Ashley Greene, endorsed SoBe Lifewater in an ad that features her wearing nothing but body paint. The photoshoot was featured in a February edition of Sports Illustrated years ago. 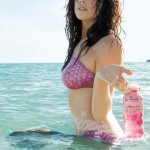 Both Sylvester Stallone and Donald Trump were among the first to launch their very own brands of bottled water – Sly Water and Trump Ice – back in 2006. Today, however, Sly Water is no longer listed as part of the Glacia Nova product line, and the website for Trump Ice water is no longer active.

Tons of other celebrities including Gabrielle Union, Cameron Diaz, Mary J. Blige, Britney Spears, Courteney Cox, Kim Kardashian, and Paris Hilton have lent their famous names to promote bottled water and mineral water brands. We fully support you staying hydrated but next time you go to buy bottled water, think about how much money you spend on bottled water and how much money you’d save if you switched to drinking glasses of water from a filter? Let us help you find the home water filtration system that fits your budget and needs today!

Are you using the best filter for your local water?

Enter your zip code to find out.